The procedure of having skin lightened is becoming more and more common each year. Though it’s been going on for thousands of years, it is still somehow growing in popularity all around the world and has been especially relevant in parts of Asia. For centuries, having lighter skin has been associated with positive characteristics such as affluence. This could be related to the fact that throughout history people with darker skin were often working in fields/farms where they would develop darker skin as a byproduct. These people were naturally not as affluent. Since these moments, people have attributed lighter skin to wealth and other positive attributes.

Do You Need It?

For most people, the answer will be no. However, if you take a look at most people who go through with bleaching their skin, you will find that the majority don’t necessarily need it. It is entirely a cosmetic concern and certain people just prefer to have a lighter skin tone. If you’re someone who would experience a confidence boost due to it, then you could potentially make the argument that having your skin lightened is something that you need in your life. We’ve went over this particular subject countless times and the bottom line remains the same – confidence is key in most areas of life and it should be improved with every opportunity. 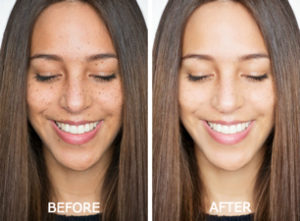 A lot of the time, you’ll find that many people consider having their skin brightened due to the fact that they have something on their skin that they deem as not pleasant. For some people this can be freckles and pimples while for other it could be dark spots or moles. Whatever the case may be, this is a very viable reason for wanting to go the skin lightening route and we would describe it as totally legitimate. If it’s something that is bothering you, you should certainly think about having something done about it rather than just doing nothing.

When Do You Not Need It

We should clarify that while some people should strongly take it into consideration, a lot of people should not have their skin lightened. These are people who do not have serious self-esteem issues and are just interested in trying it to see how they look. For these people, having their skin whitened is not a necessity but a strange desire or perhaps a curiosity. We aren’t saying you definitely shouldn’t do it if this sounds like you, but it would be fair to say that you should think twice about it. Oftentimes, there will be harmful ingredients in many of these products and risks should be avoided if possible.

If you check out our article on how to lighten skin overnight or the best creams for black skin, you’ll see that while we do recommend some natural products, we are quick to shoot down the notion that all people should consider going the skin-lightening route. It’s certainly not something that everyone should do and while it’s safe (for the most part), there is still potential for things to go wrong under certain circumstances.

Is It Dangerous To Lose Weight Too Quickly?